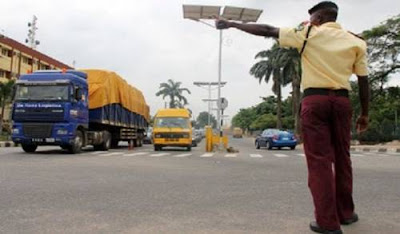 Kehinde Sonaike, an officer of the Lagos State Traffic Management Authority (LASTMA), was knocked off the Third Mainland Bridge, and into the lagoon by an overspeeding driver.

The incident occurred around 11am on Thursday in Lagos.

The driver, sensing the gravity of his action, ran away with his vehicle.

According to a witness, Sonaike was assisting a motorist, whose sport utility vehicle (SUV) broke down, before he was hit.

The LASTMA car 058 with number plate RTM 165 LA was damaged in the process. The windscreen was shattered; the driver’s and passenger’s sides behind the driver were damaged too.

Sonaike was rushed to Gbagada General Hospital, where he was stabilised. He was later taken to the LASTMA Clinic in Oshodi.

The Senior Traffic Law Enforcement Officer said he was going to Adekunle from Iyana-Oworonsoki on patrol, when he saw a man with his vehicle broken down.

Sonaike said: “Our jobs include assisting people with broken down vehicles to get it to work or call a towing vehicle from our nearest office to help move those vehicles off the road so as to avoid traffic gridlock.

“But, on my way, I saw a broken down vehicle. I came down from the vehicle and put on my hazard light so that I can assist the driver. As I was assisting the man, a vehicle came and bashed the LASTMA car from the rear, hit me in the process and the next thing I saw was that I fell off from the Third Mainland Bridge into the lagoon. I can swim a little, but the fishermen now came for my rescue. They were about four in number.”

The Traffic Law Enforcement officer said that was his first experience of such incident.

“I have heard many sad stories of how our men were knocked down by hit-and-run drivers but that was my first experience. I can only give glory to God that I’m alive,” he said.

He said he had lost all hope of surviving the incident before last-minute help came his way through the fishermen.

He said: “That moment I fell into the lagoon. I felt is this the end of this life because I told my mum when leaving home in the morning that I will be back. But immediately that incident happened, I didn’t know what to say again. While I was swimming in that lagoon, what came to my mind that time was that this is the end of life.

"But, with the little swimming experience I had, I was able to do a little thing before the fishermen men came to my rescue.”

Olawale Musa, the LASTMA General Manager, decried the action of the driver.

"If not for God that made the fishermen rescue Sonaike, the agency would be in another round of mourning by now," he said.

He said the injured LASTMA official is responding to treatment.

“The incident just shows the type of people we have on the road and it also shows the danger and the risks our men are exposed to everyday while on the road. It discourages our officials sometimes. Imagine you go to the road to assist motorists and not come back home. That man could have died if he had not got the intervention of those fishermen that came on rescue mission. But, we thank God he is safe,” Musa said.

The LASTMA chief advised drivers to be cautious on the road.

“They should always give consideration to other road users on the road and not overspeed. That guy was overspeeding. Although, I can’t measure his speed, if he was not overspeeding, he would have seen that vehicle ahead,” he said.