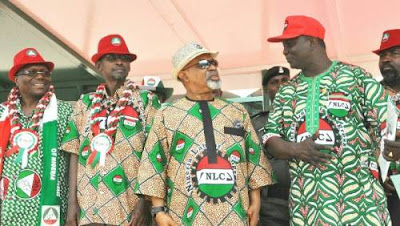 Barely few days after an attack by thugs suspected to have been sent by the minister of labour and productivity, Chris Ngige on protesting members of the Nigeria Labour Congress (NLC), the union has vowed to stage a comeback against the minister on Monday.

A circular sent to all the affiliated unions, signed by the President of NLC, Mr. Ayuba Wabba and obtained by our SaharaReporters said that the organised labour would picket the office of Ngige for undermining and disparaging the collective sensibilities of  Nigerian workers.

The NLC accused Ngige of organising his political bandits to attack Nigerian workers when his resident in Abuja was picketed last week.

Wabba alleged that Ngige had been scheming relentlessly to push Comrade Frank Kokori out of office as the Chairman of Nigeria Social Insurance Trust Fund ( NSITF) by refusing to inaugurate the board with Kokori as head.

The circular added: "This is brazen continuation of Ngige's antics and machinations against the common interest of the Nigerian workers, which obviously played out with his subversive and divisive tendencies all throughout the negotiation period for a new minimum wage.

"Tomorrow will go down in history that there was once a Minister of Labour that was picketed out of office and circulation."

Comrade Adams Oshiomhole, the chairman of All Progressives Congress (APC) on assumption of duty in 2018 had singled out Ngige and the Minister of State for Aviation, Sen. Hadi Sirika for refusing to inaugurate board of directors despite their nomination and approval by President Muhammadu Buhari.

At a point, Oshiomhole threatened to sanction the two ministers, but despite the threat, none of the duo had inaugurated the board of directors in their various ministries.