Analysis of "Piano And Drums", an African poem written by Gabriel Okara. 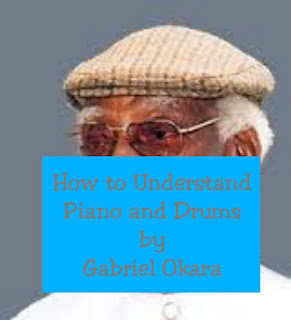 When at break of day at a riverside
I hear the jungle drums telegraphing
the mystic rhythm, urgent, raw
like bleeding flesh, speaking of
primal youth and the beginning
I see the panther ready to pounce
the leopard snarling about to leap
and the hunters crouch with spears poised;

And my blood ripples, turns torrent,
topples the years and at once I’m
in my mother’s laps a suckling;
at once I’m walking simple
paths with no innovations,
rugged, fashioned with the naked
warmth of hurrying feet and groping hearts
in green leaves and wild flowers pulsing.

Then I hear a wailing piano
solo speaking of complex ways in
tear-furrowed concerto;
of far away lands
and new horizons with
coaxing diminuendo, counterpoint,
crescendo. But lost in the labyrinth
of its complexities, it ends in the middle
of a phrase at a daggerpoint.

Analysis of "Piano And Drums", an African poem written by Gabriel Okara.

Gabriel Okara is prominent among African poets. He was born in 1921 and raised to be an Ijaw man at Bumadi village in Niger Delta, Nigeria. His full name is known as Gabriel Imomotimi Gbaingbain Okara.

Gabriel Okara as an African renowned poet is noted to be someone who fathoms African culture right from the onset. He is cognizant of the ways at which Africans are biding with their cultural orientation. In such case, he exerts an African musical instrument, drum that is peculiar to their primitive culture to make a stand for Africans and their culture in his poetic presentation. The drum is actually a symbol plied by the poet in order to make delineation for Africans.

Ordinarily, there are some other things or items that can still stand as symbols for culture of Negros.
Bringing this closer, let Yoruba entity is taken as a case study to represent the whole Africa since Yoruba is one among enormous entities in the continent.

Primarily, drum is known as an instrument that its users sometimes use to carry on communication because drum as it is has its own language that can only be understood by learned individuals. Logically, drum normally is a musical instrument that provides beats to music. It provides rhythm to music and makes dancers perform to the tune.

Notwithstanding, drum is an instrument of communication that has its own language. Wole Soyinka and D. O Fagunwa in “The Forest of a Thousand Daemons” page seven say “like the sonorous proverb do we drum agidigbo (drum), it is the wise who dance to it, and the learned who understand its language.” This ratifies that the drum has its own language and the language can only be understood by people who had experience of how drum sounds.

Take for instance in some years dated back, there would be a set of drummers that would come to the king palace early in the morning to wake the king up with the drum. Once the drum sounded, the king would understand what his drummers were trying to orate with the drumming. That is drum at the stage of performing communication function.

Likewise among the drummers themselves, they used to communicate with one another with their drums especially when they did not want common people to get an earful of what they were telling one another let alone apprehending it. Yoruba used to say that “no one knows what drum is saying exactly like the drummer”. This is given confirmation that drum as an item of African culture has a language that can be interpreted only by learned.

This is what Africans had been addicted with before the arrival of the western people who introduced their culture that included instrument among which piano was one. No one in Africa had piano until white men barged into Africa. That is why the poem personae employs the piano to represent western culture and used drum to assume the role of African culture. The effect of European cultures can be seen among African ways of life that include speaking, dressing and others. This is the apprehension of the poet Gabriel Okara as depicted in the poem “Piano and Drum”.

Therefore in the poem, the poet conducts comparison and contrast between the drum and piano that indirectly indicates comparison between African culture and western culture. He is showing how he is feeling about both cultures. That is to say, whatever he says about piano is indirectly referring to European culture brought to Africa. In other words, whatever he says about the drum is indirectly attributing to culture of Africans. He actually uses both to present conflict that exists between the two worlds.

In lines 1 to 5 of the poem, the poem personae deploys that the “jungle drum” has been in usage from the beginning of African existence. In line one, “When at break of day at a riverside”, it can be concluded that the culture of Africans is natural and had been existed before something else. The “riverside” denotes natural phenomenon of Africans as associated with the drum which actually indicates that drum is natural possession from the basis.
Then, when getting to line seventeen, the poet introduces other instrument “piano” to be wailing. “Then I heard a wailing piano”. This describes the coming of the piano by the time it was been introduced to Africans. Looking at the poet’s choice of words right from line 12 down to line 16; it can be noted that choice of connotative words like “simple path with no innovation”, “rugged”, “fashioned”, “green leaves”, “warmth of hurrying and grouping hearts” denote that the drum and African culture seem to be simple and less sophisticated. The culture is described to be having been addicted with Africans before the western culture arrived.

As from line 17, the poet’s choice connotative words like “complex”, “coaxing diminuendo”, “counterpoint” and “crescendo” clarifies that the piano and the new culture is highly sophisticated. Its difficulty is capable enough to cause confusion in the minds of the people but drum is straightforward.

It can be concluded that the poem personae has clearly distinguished between the two separate worlds with the help of poetic devices which are symbolism and imagery. In other words, the side where the poet himself belongs to is clear as can be noted in his choice words for each of the musical instrument.

THE STRUCTURAL ORGANIZATION OF THE POEM

From the poem, it can be scrutinized that there are only four stanzas with 29 lines or verses in the poem. The first two stanzas have 16 lines together that make full description of the drum as the poet perceives it. In that, feature and peculiarities of African culture is portrayed. Whilst the other two stanzas with 13 lines describe piano and show how the poet personae perceives the culture of colonial masters. That shows the complexity and technicality of the culture.

The tone and mood atmosphere of the poem seems to be sad and displays that there is regret in the poet’s mind as a result of negligent side that Africans have turned to their culture.